27 March 2008
The opening of Piers 3 & 4 at UTC container terminal (UTC stands for "Ukrtranscontainer" and is an affiliate of National Container Company) in Illichivsk Commercial Sea Port was named the main achievement of 2007 in the segment of sea and river transport of Ukraine. 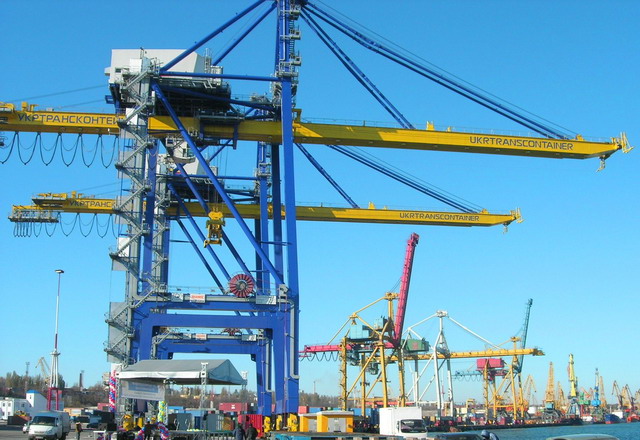 The prize was awarded based on the outcome of the opinion survey conducted by "Ports of Ukraine" magazine among various members of the shipping and maritime community of Ukraine. The interesting fact is that during the same survey conducted in the preceding two years, i.e. 2005-2006, the shipping community had not come up with anything in particular that was worth mentioning as far as positive developments were concerned.

The top managers of the industry agreed that 2007 would be remembered in Ukraine as the year of strategic breakthrough in the segment of liner shipping and terminal business. First of all, in 2007, for the first time in maritime history of Ukraine, UTC introduced and successfully implemented the system of fixed berthing windows. The new practice replaced the widely spread "first come, first served" scenario which used to be the only way of vessel handling in the local ports for many decades. Secondly, as a result of UTC's initiative to switch to the system of fixed berthing windows and provide better schedule reliability, the terminal's clients were enabled to launch direct services from China and deploy larger vessels with in-take capacity up to 5,500 TEU.

None of the above developments would have taken place had it not been for the ambitious terminal expansion plan executed by UTC and its parent company, NCC. The first phase was completed in 2007 and included significant yard extension, dredging alongside and procurement of modern equipment needed for the newly implemented RTG handling system. All that resulted in additional terminal capacity, so now the facility can handle up to 850,000 TEU per annum. The continual expansion of UTC is vital for the local container market which has grown by an average of 34% per annum over the span of the last five years and exceeded 1 M TEU in 2007.

UTC will continue to invest in terminal development in order to match the expectations of its customers and provide sufficient terminal capacity to accommodate their organic growth.