03 September 2021
FESCO Transportation Group (“FESCO”, the “Group”) and JSC Atomenergoprom (“Atomenergoprom”, part of the Rosatom State Corporation) plan to establish on the territory of Public joint-stock company “Commercial Port of Vladivostok” (“CPV”, part of FESCO) the Eastern Transport and Logistics Hub within the framework of the project implemented by the Rosatom State Corporation on organization of Euro-Asian transit of container cargo. 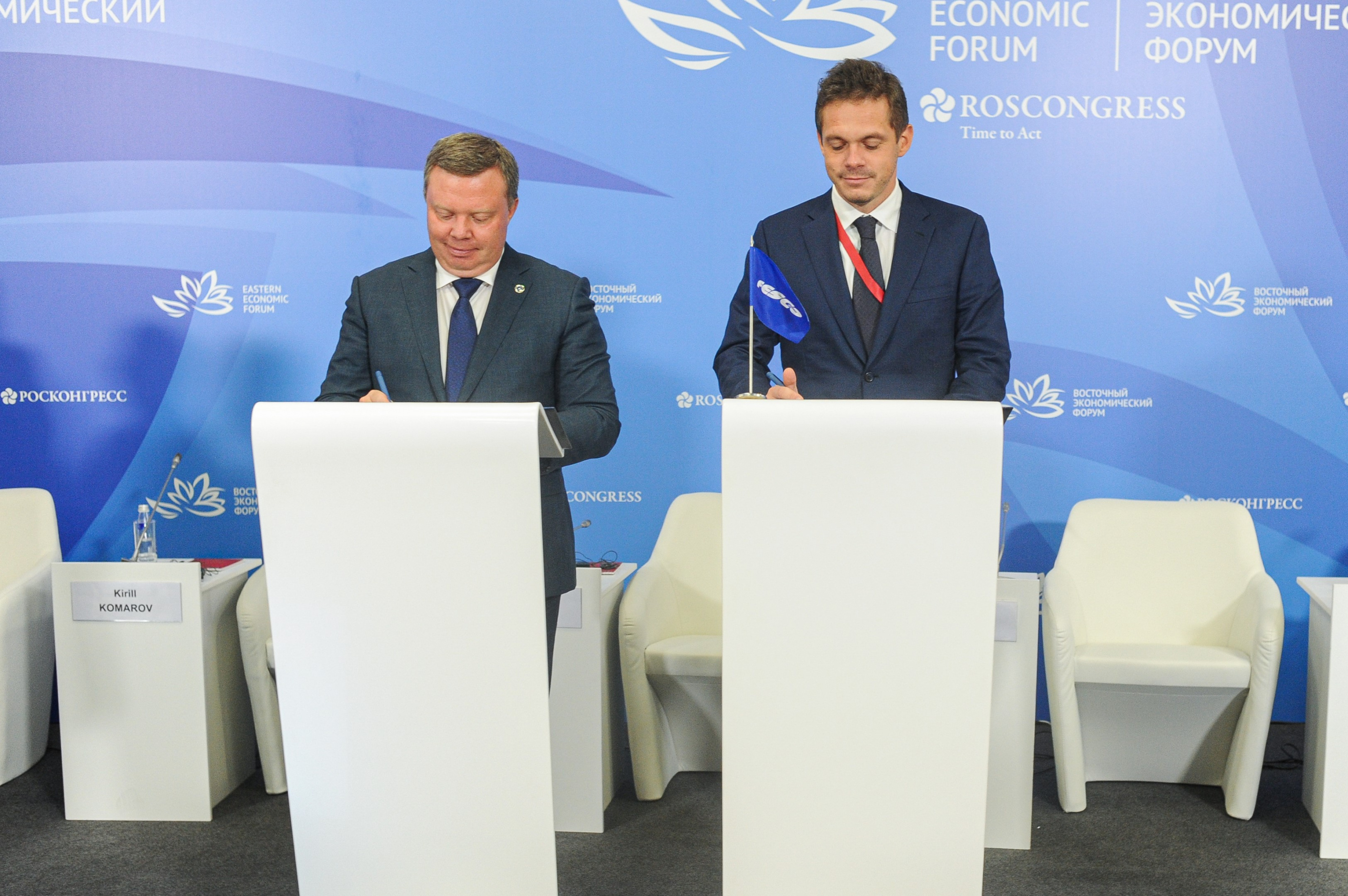 The corresponding cooperation agreement was signed during the Eastern Economic Forum (EEF) by Andrey Severilov, Chairman of the Board of Directors of FESCO and Kirill Komarov, Director of Atomenergoprom, First Deputy Director General – Director, Development and International Business of Rosatom State Corporation.

The Eastern Transport and Logistics Hub (TLU) is intended for transshipment of containers between arctic-class and feeder vessels. The Eastern TLU is to become part of the Euro-Asian Container Transit project, which involves development of container cargo transportation on route East Asia-Northwestern Europe, including via the Northern Sea Route, within the framework of which it is planned to create two transport and logistics hubs – in the west and in the east of Russia and to organize container shipments between these hubs by ice-class vessels.

To achieve these goals, the parties plan to create a port infrastructure on the territory of Commercial Port of Vladivostok. This will increase capacity of the port and attract additional cargo traffic to the route.

“We have enormous experience in organizing cargo transportations from countries of the Asia-Pacific region via the Far East of Russia and are rightfully considered to be the leader of this market segment. The captains of FESCO stood at the origins of laying the Northern Sea Route and throughout the history of the company made a significant contribution to development of this most important transport artery. A logical step in the development of these two directions will be the establishment of the Eastern Transport and Logistics Hub. In cooperation with Rosatom, we will be able to strengthen the capacities of Commercial Port of Vladivostok, which is already one of the most advanced port enterprises in Russia, in order to offer our partners optimal logistics solutions and help them fully take advantage of the unique benefits of this route,” Andrey Severilov noted.

Kirill Komarov: “The Euro-Asian Container Transit project aims at creating an additional global transport route between Europe and Asia to increase the stability of global logistics system and integration of Russia into world trade. We have a large amount of work to do to create an appropriate infrastructure on the way to the launch of the project, and today we are taking an important step in this direction”.