08 February 2017
FESCO Transportation Group (“FESCO”) is launching FESCO Moscow Shuttle Express (FMS-Express), a new regular container service on the Vladivostok-Moscow-Vladivostok route as part of the Trans-Siberian in Seven Days, a solution offered by Russian Railways. This is the first service in the project to operate in the opposite direction, from Moscow to Russian Far East. The transit time via the Trans-Siberian Railway is about seven days. 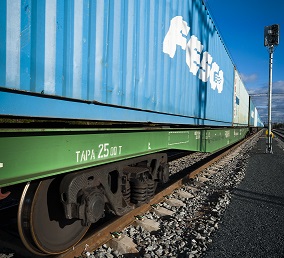 The first FMS-Express eastbound container train from the Silikatnaya station, Moscow Railway, arrived in Vladivostok on 30 January 2017, and back in Moscow (reverse route) on 3 February 2017. The new high-speed trains will be departing from both Vladivostok and Moscow once a week, with plans to soon add more trains to the schedule. The total transit time between Silikatnaya and Vladivostok stations including cargo handling in terminals is eight days.

FMS-Express has been implemented under the Trans-Siberian in Seven Days project adopted by Russian Railways, a state-run monopoly, to establish a high-speed non-stop operation from origin to destination. With this arrangement in place, the standard transit time for FESCO’s existing shipping services via the Trans-Siberian Railway has been reduced from eleven to seven days while increasing the average route speed from 830 km/day to over 1,000 km/day. The benefits of electronic records management and a preliminary transit declaration process have also helped pave the way for the successful launch of FMS-Express.

FMS-Express is part of FESCO’s intermodal chain to handle foreign and transit shipments through Vladivostok via the Trans-Siberian Railway, one of the best land routes connecting Asia, Russia, and Europe. The Trans-Siberian in Seven Days project ensures timely and accurate deliveries at exact intervals.

Over the last five years, FESCO has dispatched over 3,000 container trains on the Vladivostok-Moscow-Vladivostok route. The trains on the route operate on a daily schedule.