19 January 2009
Since January 16th, 2009 the Vasily Golovnin has been unloading supply cargo, fuel and equipment to the polar stations of Argentina in the Antarctic. 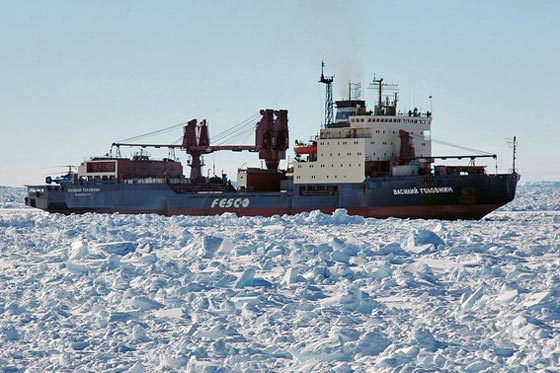 The cargoes are delivered to shore by two helicopters KA-32 based onboard of the FESCO vessel. The shortest distance between the vessel in the ice and the shore is 5, 5 miles. The Vasily Golovnin is adrift with the ice offshore to the north due to the depth over 320 m under the keel. The unloading operations are scheduled to be completed by January 20th and the vessel will proceed from General Belgrano II to Orkadas station.

The Vasily Golovnin arrived at General Belgrano II station under the ice lead of the icebreaker the Kapitan Dranitsyn. The ice conditions were adverse and the icebreaker had to stop several times to break a channel for the transport vessel, both proceeded with the variable speed 2-5 knots, making the way in the pack ice of 1-1,5 m in depth.

Mr. Iksan Yusupov, Master of the Vasily Golovnin, visited the Embassy of Russia in Argentina to report the arrival of the vessel and to receive over 50 honored and VIP guests onboard of the vessel.

This is the second expedition of the Vasily Golovnin in the Antarctic to supply the polar stations of Argentina. The first one commenced in 2008 in the south extremity of Argentina – the port of Ushuaia.

The Government of Argentina, the Navy and the scientists on the stations appreciated the FESCO vessel operations, high-professional and skillful crew. This season the Vasily Golovnin is operated under the timecharter with TRADE BAIRES INTERNATIONAL S.A.

Far Eastern Shipping Company (FESCO) is well-experienced in the Arctic and the Antarctic operations. FESCO vessels have loaded and unloaded various cargoes at the unequipped ice shore over 50 years. Most of these cargo operations and voyages are unique in terms of risk and elaboration.