12 November 2015
FESCO «Krasin» icebreaker has completed navigation in the eastern sector of the Arctic Region, providing pilotage of the vessels along the Northern Sea Route. This project was carried out at the request of the Federal Maritime and River Transport Agency of the Russian Federation. 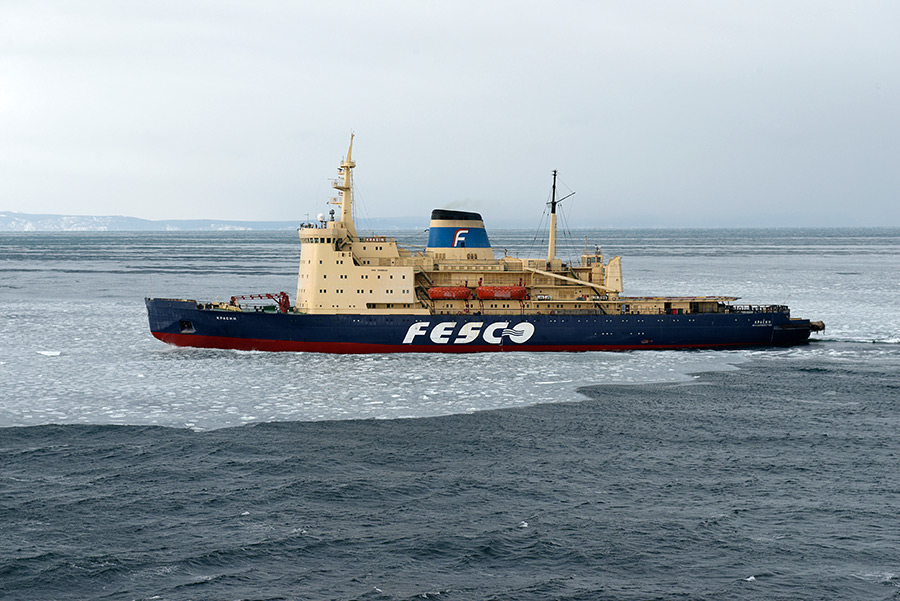 During this time the icebreaker has provided navigation of 32 vessels which delivered 114,000 tons of general cargo to the ports of the Northern Sea Route and taken out 87 000 tons. In addition to «Krasin», FESCO cargo vessels also took part in this Arctic season transportation, they are: general cargo ship «Ussuri», ship «Vasiliy Golovnin» and timber ship «Abakan».

«Krasin» icebreaker will return to the home port Vladivostok on November 14, 2015. Further it is planned that «Krasin»’s will be prepared for the next voyage on November 26, 2015 together with the other FESCO icebreaker «Admiral Makarov». These icebreakers are to escort Aframax crude oil tankers (deadweight over 100,000 tons) from the port of  through the Tatar Strait under the contract with Exxon Neftegas Limited, operator of the Project.

FESCO has a unique experience in the Arctic: more than 100 years ago steamer setting sail «Kolyma» delivered government cargo to the Kolyma estuary, and since 1956 FESCO icebreakers have been regularly providing ships navigation in the Arctic along the Northern Sea Route. Since 2004 FESCO has been carrying out pilotage of vessels at the request of the Federal Maritime and River Transport Agency of the Russian Federation. Besides that, FESCO cargo vessels deliver general cargo to the northern ports of Russia, FESCO icebreakers provide navigation in The Sea of Okhotsk, the Tatar Strait and Aniva Bay.