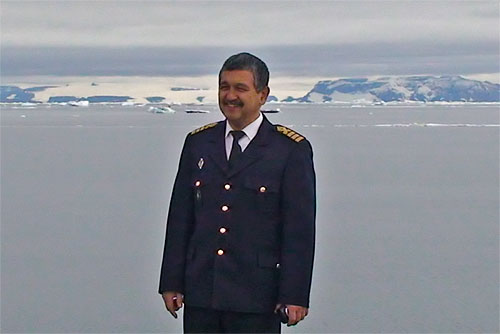 On January 21, 2009 at 08:00 a.m. (Vladivostok local time) the Vasily Golovnin departed the station General Belgrano II heading to Orcadas (another polar station of Argentina). The vessel is schedule for arrival to Orcadas on January 30th, 2009 depending on the ice condition during the transit. The m/v Vasily Golovnin will leave the ice-breaker the Kapitan Dranitsyn off the cape Norvegia and proceed further alone.

Master Yusupov informed that “the cargo was discharged completely at the station General Belgrano II and it had taken three working days. The total lay time at the station amounted 5 days due to 2 bad weather days”.

Photo of Iksan Yusupov, Master of the m/v Vasily Golovnin.