The new FESCO vessel is launched 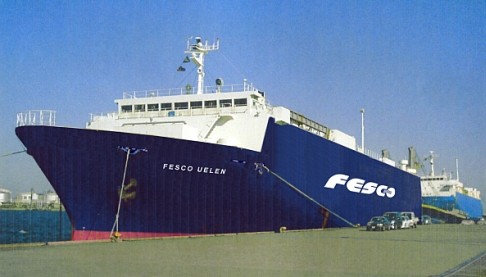 The launch of vessel, which has been under construction on the shipyard Aker FinnYards for Far-Eastern Shipping Company PLC (till January, 1st 2005), took place on the 18th of February in Finland.

According to the report of Yuriy Orlenko - the manager of Control group of FESCO ship construction, “construction is accomplished in full accordance with the work schedule. On the 18th of February the last stage of ship testing before the launch was finished. Then the graving dock, where the constructive hull and unit assembling of the icebreaker, consisting of 25 ready-made blocks, has taken place, was filled with water. Here, in the dock, it’s final development will be accomplished.” According to the schedule, in the beginning of the next week the three main diesel-generators will be launched. On the 7th of March the first launching and work testing of two main ship movers – azipods – will be carried out. After conducting of all necessary balancing and commissioning the ship will put to sea for trials, where testing and final checkout of all new ship’s mechanisms and equipment in extreme conditions will be realized.
. Sea trials, set on the 11th of April, are the most important stage of checking the ship readiness for work, where conditions of engine, maneuverability, speed, precision of equipment and navigation will be checked.
At present the vessel hull and movers of azipod type are completely constructed. All essential ship and supply equipment is delivered aboard and being mounted. During this month the cabining and wiring works will be finished. .

The vessel FESCO-SAKHALIN is being constructed by specially developed project of " double action" of Sea Northern Research center (Finland) and it is intended for work on service of oil-and-gas derrick in icy conditions and all-the-year-round watching in area of a shelf oil recovery.

The uniqueness of the project and technique of the icebreaker is estimated by international experts. First of all the vessel differs from other ones by the equipped system of movement. The vessel equipped by 3 electric diesel engines - generators (capacity of 13 thousand watt each), and two movers of azipod type with rotation of 360 degrees, in addition carrying out a role of a rudder. All these allow a vessel to move in ice as a nose as a poop forward, thus not losing the riding qualities.

This vessel has excellent maneuverable characteristics and system of dynamic positioning that enables the icebreaker to be kept on one place concerning a ground near a platform with the maximal amplitude of fluctuation of all half-meter. Besides there is an opportunity to create the water channel in broken ice with frost penetration to the bottom, that is practically impossible of the casual type icebreaker.

The high-class automated control systems allow to carry out watchless machinery maintenance in the common work situations at sea and in port.

One more feature of this icebreaker is the opportunity of using it as the rescuer-boat, capable to extinguish a fire and oil spills and in case of accident on a platform - to accept aboard up to 150 person. Besides the specially designed deck is strengthened for load per area unit for carriage of heavy load. The ship has 6 sections of 50 cubic meters each for shipping of cement and other bulk cargo. The vessel supplier is equipped with fuel tankers, which allow to place on the ship 1400 tons of diesel fuel and 1000 tons of heavy oil fuel. Besides specially projected ship deck of 70 meters length and width of 21 meters has strengthening for increasing of unit load, that allows to ship heavy and bulky cargo.

The icebreaker named “FESCO-Sakhalin” will work under the program of the project « Sakhalin-1», according to the tender which is carried out earlier by the company «Exxon Neftegas Ltd».

The construction of separate block-sections of the icebreaker was started in March of 2004 on yards factories. Delivery of vessel to the customer is planned on May 31 of 2005.