30 April 2021
Gennady Antokhin, a captain and mentor working in the security and quality department in the Vladivostok branch of Far-Eastern Shipping Company (FESCO, parent company of the Group), was awarded the title of Hero of Labour of the Russian Federation for his exceptional services in labour to the state and its people. 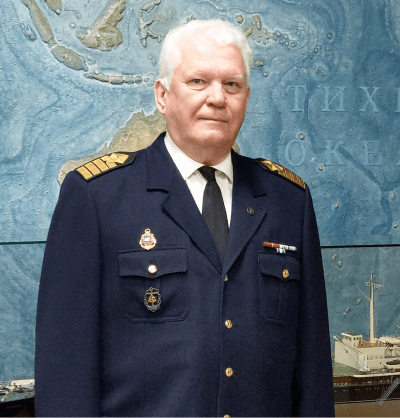 The decree was signed by the Russian President on 30 April 2021.

“Exceptional experience and outstanding qualifications of Gennady Antokhin made him an irreplaceable worker, especially in times of rescue operations and for training the professionals for the Maritime Division of FESCO. I want to sincerely congratulate him on receiving the award and to wish him good health and well-being,” noted Arkady Korostelev, President of FESCO.

Gennadiy Antokhin served as a captain on FESCO’s ships from 1982 to 2012. He took part in many rescue missions, including the mission for rescuing the research vessel ‘Mikhail Somov’, which was trapped in the ice, in 1985, and fishing vessels in the Sakhalin Gulf in the Sea of Okhotsk in 2011. He has received many national and departmental awards for his dedicated work, including the medal of the Order “For Merit to the Fatherland, IV degree”.